I.C.C. Evidence Preservation Reference has proven that the Queen's Rothschild Banking Mafia in the City of London has total control of all major oil companies by the use of secret offshore trusts. However, this control is apparently in all industries as proven by a video from The Netherlands and the Women For Freedom Organization. This video proves that all of the major corporations worldwide have a secretly owned company called Vanguard that owns the most stock of each of these companies. Yet nobody knows who owns Vanguard. Well it is the Rothschild Banking Mafia and the Queen of England via secret offshore trusts to elude the public from finding out who owns this financially devastating world monopoly on world commerce. All entrepreneurs know that capitalism only functions in a "free market" environment. Any changes to the "free market" by any monopoly in any industry completely wipes out all prospects of financial success for anyone else in that market. However, Vanguard and this Banking Mafia have a monopoly on basically all industries.

Therefore, additional pressure is placed on the entrepreneur under such monopolistic business competition in the world today. Any new industry that one is researching and developing will not only be spied upon by Vanguard and its spider's web of jackals looking to "move in" on a new born industry, but you have the usual industrial spying experts from China and the second biggest player, Israel to contend with, and they use their most advanced military spies to steal business secrets world wide AS WE SEE IN THIS VIDEO SHOWING THE ISRAELI MINISTRY FUNDING ISRAELI POLICE WIRETAPPING FIRM IN USA THAT HELPS ISRAELI MAFIA DRUG DEALERS HIDE FROM THE USA DEA (DRUG ENFORCEMENT AGENCY). The British Queen and Rothschild's secretly held Vanguard Corporation is actually Industrial Espionage utilizing financial sabotage via their monopoly of all industry in the world preventing entrepreneurs in the middle class from earning a decent living. These people are the worst kind of criminals in the world, period, when they wipe out the average capitalist from achieving financial freedom, and instead only allowing the masses to be financially enslaved, the Modis Operandi of Kings and Queens since the begining of civilization. This is not capitalism, but merely slavery that tricks us into thinking we are not slaves.

"None are more hopelessly enslaved than those who falsely believe they are free."
- Johann Wolfgang von Goethe

offers customers a military grade encrypted alternative to email and telephone calls that prevent the competition from spying on your company and stealing intellectual property and for example, gaining information to begin stalking your family members and employees when off of work. Currently, China and Israel are the biggest international spying adversaries all firms worldwide must defend against. It is easy to grasp the idea that China is a heavy player in the industrial spying arena, but not Israel with its tiny population right? Wrong, the Mossad have used tools like the Jeffery Epstein Sex Mafia to steal secrets from companies. Trump's daughter Ivanka Trump's father in law, Charles Kushner is just such an Epstein Mafia member. Charles Kushner was sent to prison for years for hiring a prostitute to date a witness in a court case charging Charles Kushner with felonies, in order to blackmail the witness to stop the witness from testifying against Chales Kushner, by exposing the witness's relationship with the prostitute posing as the witness's girlfriend.

These are the most dangerous types of spying, as there is no defense against them since they use every trick in the book.

has actual experience fighting the Epstein Mafia in California and other states since 1987. We excel at our business because we once were victimized by this organized crime syndicate. We are therefor extremely motivated to help others stop these jackals dead in their tracks with an array of sophisticated hardware and software systems and techniques. We offer these services to any company that is a target of these criminals at very reasonable prices. Please contact us HERE or use the contact button below or on the menu. We can begin to assess your vulnerabilities with a free consultation to determine the best course of action that will protect your firm, its principals and their families from these extreme dangers.

You can not trust Whatsapp or Signal or Telegram because they use your mobile phone numbers to connect users, and this is just the information that these MI-6/CIA/Mossad industrial spies need to figure out who you talk to and email. Once the MI-6/CIA/Mossad industrial spies have your mobile phone numbers, they can send a special text message to your mobile phone that will hijack your phone and put a root kit on your phone that lets them secretly record everything that you say around your phone. And once they have your phone number they can find your location using the mobile phone towers to triangulate your exact location and send secret agents to follow you in unmarked cars to see where you live and work and usually they will break into your houses and breach your company's security using additional paths made available by these security breaches.

Furthermore, Whatsapp is a Facebook company owned by Mark Zuckerberg. Facebook was stolen by Mark Zuckerberg from two brothers who he had to pay $200 million dollars to, for stealing the brother's company in a lawsuit that the brothers won against Zuckerberg. Zuckerberg is therefor obviously part of the Jewish Mafia/MI-6/CIA/Mossad too, as Facebook is the ideal platform to be owned by these "Big 3" players in the game. Warning, only one encryption key is used in Whatsapp, so that your "encrypted" Whatsapp messages can be read by Zuckerberg and his crime gangs in London, Langley and Tel Aviv.

generates a separate 3072 bit encryption key for every device that runs our encryption system, and each device then encrypts its secret key so that nobody, not even the user of each device can view it.

And if you think the CIA is really helping and working for the USA, then you are mistaken. Amazon's owner Jeffrey Bezos also was visiting Jeffrey Epstein and his 14 year old prostitutes at Epstein's house in New York City. Jeffrey Bezos obviously had sex with 15 year old girls and so he is in the Jewish Mafia too. Jeffrey Bezos supplies the CIA with all of their computer server systems running them on Amazon's AWS Cloud servers. How can the CIA trust an organized crime boss and pedophile to run all of their computer server systems, unless the Jewish Mafia runs the CIA too? Yes you guessed it, the CIA is part of the Queen's Rothschild Banking Mafia and they all are pedophiles apparently from the Queen on down the line to her son Prince Andrew, who was caught with underage girls at Jeffrey Epstein's New York house.

never uses your mobile phone number so there is no way for the industrial spies at MI-6/CIA/Mossad to find out that you are talking with encryption to anyone at all! We use a secret system that travels over the Tor Network to cloak all of your encrypted traffic from our servers. Then we use HTTPS ports 443, just like online banking uses, so your phone calls look like banking web traffic, even if you do not turn on Tor's extra level of encryption and obfuscation of your Net traffic. Finally,

World War II is a classic example of how political wars are all in reality just Industrial Espionage and Industrial Sabotage. You must understand that both World War I and II were both merely Industrial Sabotage of Germany who in the year 1900 was the top country in the world in Industrial Production and Science and Technology. The English needed to blow Germany up in total sabotage of its industrial and economic production because Germany was devastating to the economy of England since English workers were pathetic at everything.

Look at the map below to understand how Hitler designed the war himself as a English spy would design it to trap Germany into the jaws of a military Pincer Movement which is just really getting your army surrounded. Only a kindergartner of around the age of three would not understand this military manouver and how it can get you in serious trouble, but then I believe anyone who has even been in kindergarten has been surrounded by too many kids advancing on his territory too, and may even understand this. So surely the German Generals knew extremely well that Hitler was a spy by his action of fighting the Russians on the east side of Germany and fighting the Allies on the west side of Germany all at the same time.

Finally, if you don't accept this, then you should not apply for a job in the German Army but hey, maybe you can get a job in some other country where people believe in fairy tales like Hitler was working to try to help Germany.

However, please try to educate yourself on this evidence list of 10 things that prove Hitler was an English spy and hired gun payed to kill Germany on our web page here. 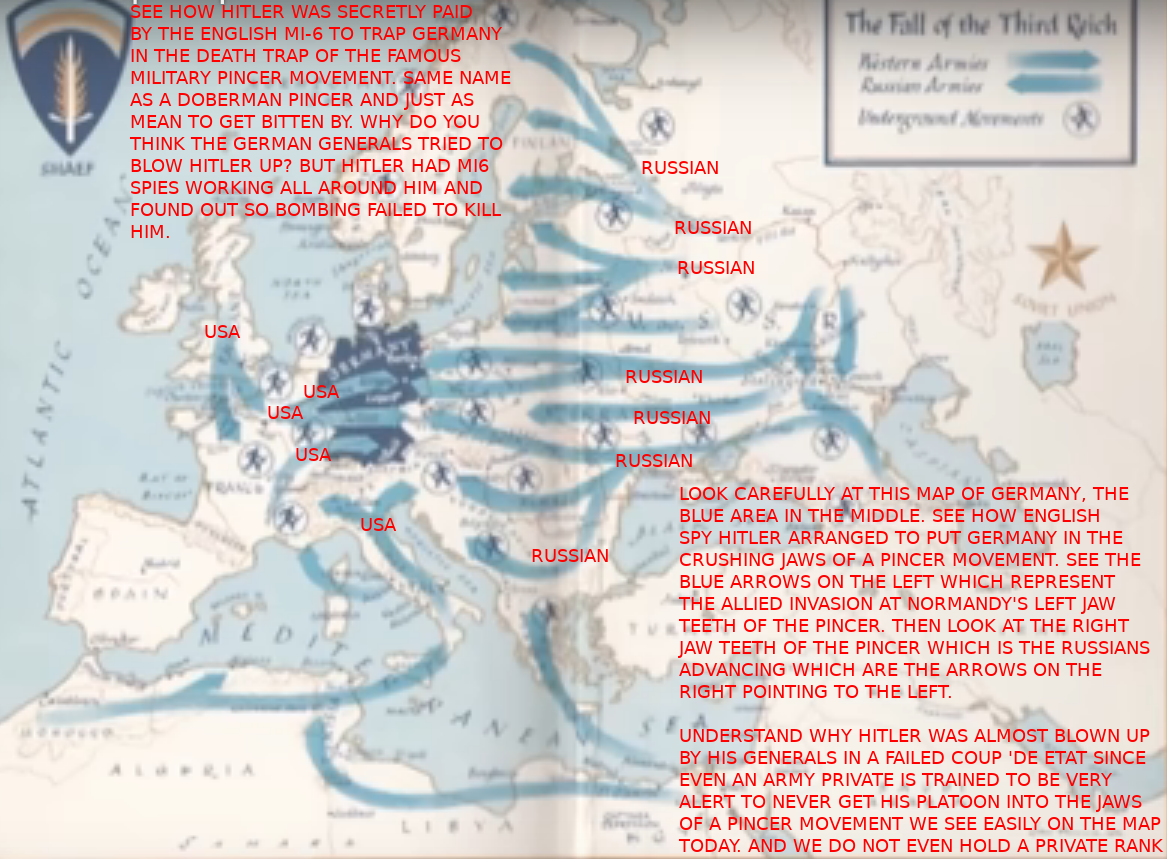